Development Update - Roadmap for the rest of development!

Hey everyone, Micah here! I'm posting another update to let you all know what's going on with development, as well as what to expect going forward.

First off, at the end of March I uploaded a video for the original game's three-year anniversary. In it I discussed how development has been going and why the next update has taken as long as it has, among other things. You can check it out below if you haven't seen it yet:

To summarize, I discussed

Since then I've been working on finishing Baldi's Basics Plus version 0.3.3 and Baldi's Basics Classic Remastered, and wow, I can't believe it's already almost been two months since the video released! Time is flying by. I was hoping to have both of those things released by now, but as I mentioned before I no longer want to rush things out and sacrifice quality. I am sorry about the wait though. Baldi's Basics Plus 0.3.3 will likely release first, and won't take much longer. Classic Remastered will follow shortly after that, so keep your eyes open for those announcements!

With that update out of the way, I'd like to talk about the rest of the game's development. I talked about this nearly a year ago shortly after the launch of Baldi's Basics Plus, and some of my plans have since changed as I've learned a lot from this first year of post-release development. I want you all to know that this current update hiatus was not at all what I wanted or planned for the first year of the early access, and I'm sorry for how long you've had to wait for updates. I want to make sure this doesn't happen again, so I'm taking the time to properly plan out the rest of development before I get started on game updates again. I know this may seem counterintuitive, but once I have the game design document finished and an update schedule made (A schedule of features and their respective updates to be added in, not deadlines) I feel confident that I'll be able to release updates at a consistent pace for the rest of development.

To give an idea of what you can expect the rest of development to be like, I've put together a roadmap which summarizes my plans: 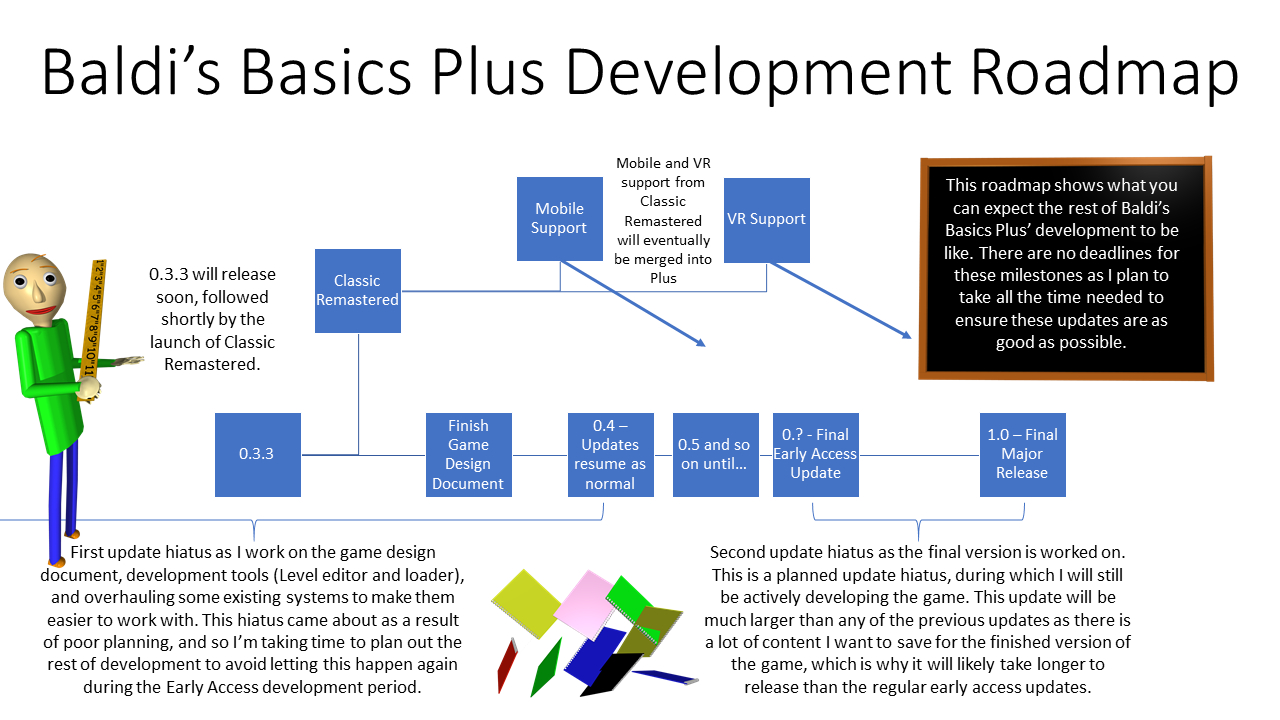 Currently on the timeline, I'm right before the release of 0.3.3. Once that and Classic Remastered are released, I'll be finishing up the game design document and update schedule. Once that's finished, I will begin actively developing the game again and end the current update hiatus with the release of 0.4. At this point major updates should release consistently until the final early access major update. Once this releases, there will be a second update hiatus as I work on the release version of the game. The reason for the second update hiatus will not be due to poor planning like this first one, but rather due to the fact that the final update will be significantly larger than any of the previous updates, and so it will take a lot longer to finish. This is because there's a lot of content that I plan on saving for the release version of the game, rather than sprinkling in via the early access updates.

Things saved for the final release will largely be things that aren't part of the core gameplay or that rely on other aspects of the game being finished, such as:

The reason for holding off on certain elements largely has to do with the fact that if I were to do a lot of work on them now, I'd have to re-do them later once more content is in the game and more stuff finalized. If I were to make more challenge maps during development for example, I'd probably eventually end up completely redoing them as I add more level elements to the game, which would effectively make the time spent developing the older versions a waste. The menus are another example. I could spend time now to make them look a lot nicer than they do, but then I'd just end up completely redoing them near the end of development which would make working on them now a waste of time and resources. I say this to remind everyone that the current lack of polish, horror elements, personality, and many other elements in the game largely has to do with the way development works, not that I've forgotten about those things or don't care about them!

And I think that's everything I wanted to say today! As always, thanks for your patience and the support while I get this crazy game sorted out, it means a lot. Know that I'm just as eager to get back to releasing updates as you all are to play them, so I'll try my best to finish the game design document soon and get back to active development!